MacOS Version. Render Boss is officially cross-platform! We’re still working on the Mac version for stability and features, but it renders well in most Macs that we’ve tested. You can send renders from either PC or Mac to any combination of PCs or Macs, and render with multiple threads on your Mac right now. We expect to have feature parity with the PC version later this year.

Boss A.I. We completely rewrote our thread manager. We realized that after a certain point, more threads doesn’t speed up renders anymore, and can actually slow them down. So instead of trying to pin the CPU and RAM to 100%, Boss A.I. now monitors how fast the machines is rendering and tries to find the right amount of threads that will render the fastest.

Remote and Cloud Renders. Now Render Boss allows you to send renders over the internet, either to your own farm or to a cloud-service. This allows you to create a massive render farm either on the cloud or in your office. If you or your artists are working from home, it’s possible to send the renders from home to your own farm and render faster while your computer stays free to keep working.

Mobile Notifications. Step away from your computer, and let your phone tell you when your renders are done.

Split Jobs to one job per comp. If you’re sending multiple comps to render, you can split them into individual jobs (instead of a single job for all the comps). Giving you more control over the render. If you have multiple render machines, this also allows you to split the jobs among the machines, even when not using multi-threaded renders.

*In order to share the improvements as fast as possible, we publish each feature throughtout the year as soon as we deem it ready, rather than in a big update. This list reflects all the changes since version 1.1.0.0. So if you’ve had any version in between 1.1.0.0 and 1.2.0.0, you might already have some or most of these features

New UI. The main focus of this release was ease of use and simplicity. We put the renders front and center, and moved options that don’t to be accessed as often in secondary menus.

Multi-Machine Assistant. Render Boss now will produce better time estimations, and they will improve over time, as it remembers how long previous renders took. This module is in Beta right now, but it’s already an improvement over traditional time-estimations.

Added Clear Renders buttons. For quick and easy cleanup of completed (or all) renders.

Improved the render info window. Double-clicking on an item in the File Queue now shows more information about it, including effects needed, status in other machines, activity, output details, etc.

Post-Render Actions. Now it’s possible to run a custom executable after each render.

Send Logs to Support Button. Now it’s easier than ever to send logs and other files to our team, for quicker support.

Tons of speed and stability improvements. Mostly in communication between machines and render startup.

Numerous Under-the-hood improvements, and bugs fixed. There was a big push to improve the engine for this release.

Custom Names. Now it’s possible to name each render before sending it to Render Boss.

Telemetry Module. Render Boss now will produce better time estimations, and they will improve over time, as it remembers how long previous renders took. This module is in Beta right now, but it’s already an improvement over traditional time-estimations.

Render Info Window. Double-clicking on an item in the File Queue now shows more information about it, including effects needed, status in other machines, activity, output details, etc.

Improved Communication between machines. An under-the-hood improvement that brings several advantages. For example:

Improved detection of Missing Effects. Now Render Boss immediately detects if a render will have missing effects, before it even starts the render.

Resolved frame synchronization issues. Fixed and issue that arose sometimes when using several machines of wildly different speeds, with multiple threads on each. Those issues sometimes resulted in a faster machine trying to render the final video before a slower machine had finished its frames. Now, the machine designated to render the final video will check for unfinished frames, and render them if necessary.

Added remote command to exit app. Now it’s possible to close the app remotely in all the machines.

Targeted Rendering. Now it’s possible to send a render to a specific machine. Other machines can still be added manually.

‘Stop On all Machines’ option. Now it’s possible to stop a specific render on all machines without affecting the machines rendering a different file.

Quick Swap Work Folder. on the AE Extension. Now the extension remembers the previous work folders used, and can be swapped quickly. Useful on environments with different machines rendering different different projects (Quick swap on the app itself has been available for a while).

Faster Sending to Renders. The process to optimize the comps to render with multiple threads has been improved and dramatically sped up in most cases. Especially on Render Queues with a lot of comps.

Better Check for Missing Items. Now you have more granular control on what can and cannot be missing from a project before a machine stops rendering. This reduces the rates of bad frames due to a machine missing footage, fonts or effects, while giving you the flexibility to override each one separately.

Machines and File Queue Sorting: It is now possible to sort items in the File Queue or Machine List.

If you need to reach out, use the Contact Us button in the app. 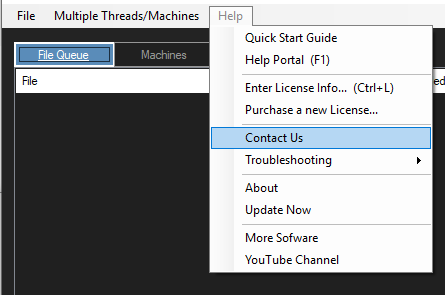 If that’s not working, or you can’t launch the app, send us an email to: [email protected]